Oh, we do like to be beside the seaside!

We Brits love to complain about the weather.

We have a lot of weather to complain about.

Today, in the middle of the month of May, the sun was shining. So my wife took me to Brighton. It was actually a belated birthday present. My birthday was in March, but it was wet and windy, so we didn't go. We just moaned about it being too wet and windy.

Fortunately, although it was sunny today, it wasn't hot. There wasn't even a mention of wet, windy or gloomy in the weather forecast. So, as we boarded the train at St Albans for the comfortable two-hour ride southwards through London and past Gatwick Airport to the Sussex coast, thousands of others in the south of England were doing something very similar. By the time we arrived, the world and his wife were sitting in deckchairs on the beach licking ice-creams. 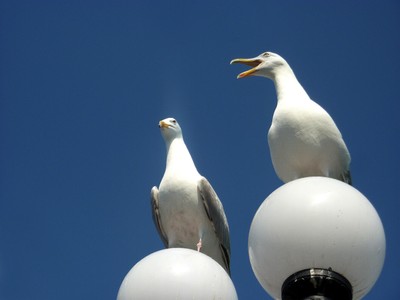 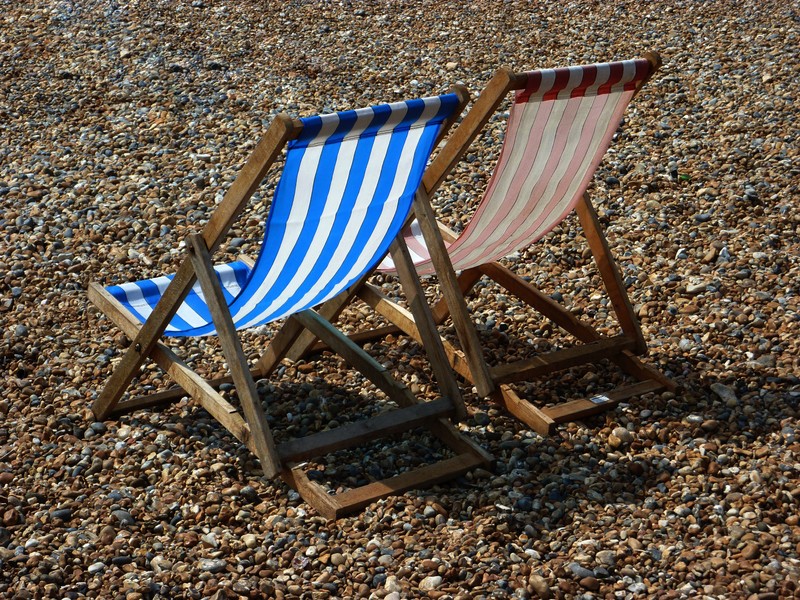 You can read all about the history and geography of the town with a click of your mouse here. The London to Brighton veteran car rally ends here every year. There are more restaurants per head of population here than anywhere else in Britain outside of London. The list of the great and good associated with Brighton and nearby Hove runs to several hundred, most of whom you've never heard of or who have long-since gone to sunbathe on that fluffy white beach in the sky. And it's said to be 'the gay capital of Europe', although that's possibly apparent only after the sun goes down. For the most part, this is still a quaint Victorian seaside town with narrow lanes, up-market shops and pleasant little cafés. In a few parts, it's a bit everyday, grubby, down-at-heel. It's historic, kiss-me-quick and family fun all at the same time. There's something here for everyone.

We particularly liked strolling along the seafront. The pedestrian promenade above the wide, shingle beach gives views to the sea and the two piers, the West Pier just a blackened skeleton following two fires and several storms. Below the promenade, alongside the beach, is a busy walkway with seafood stalls and small art and souvenir stores, bars and fish-and-chip shops burrowing into the archways beneath the pavement above and spilling out onto the foreshore. 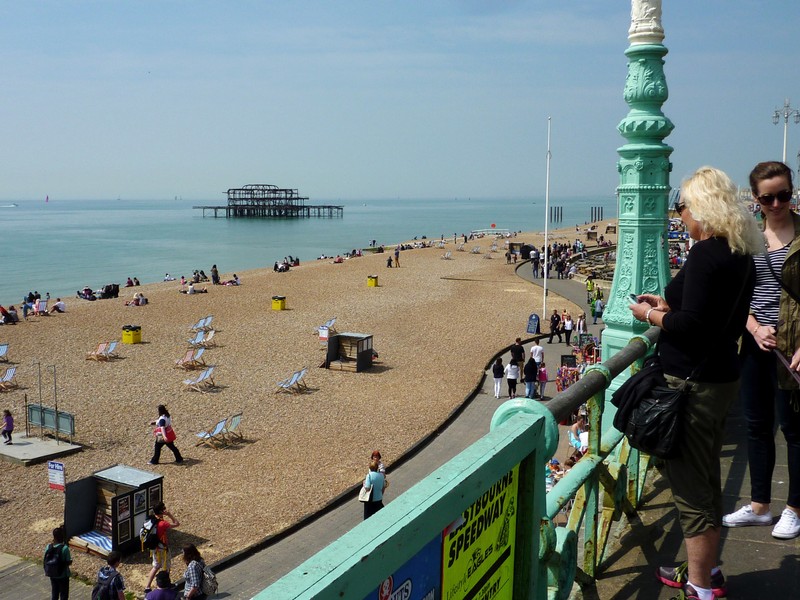 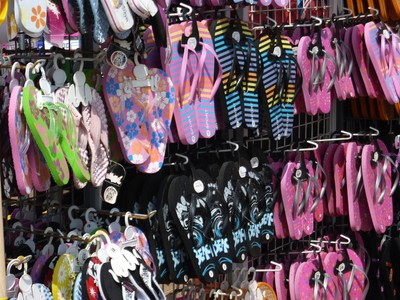 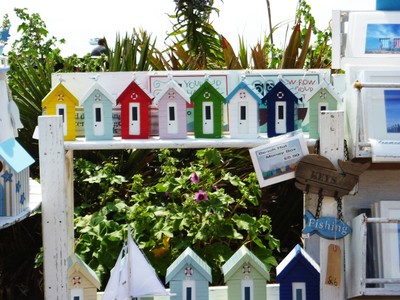 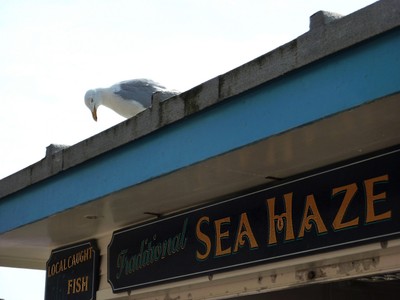 There are plenty of places to sit and while away an hour or two on the remaining pier (promoted as Brighton Pier, but known locally as Palace Pier). Alternatively, like us, you can walk along its wide wooden boards with the sea on either side of you, to simply breathe the bracing air and watch jet skis dashing dangerously across the waves beneath. Others might enjoy playing slot machines in the noisy amusement arcade or riding exhilarating roller coasters at the pier's most southerly point. Beyond the pier is another wide expanse of beach, crowded with families enjoying themselves on this sunny day, together with a Big Wheel and other things to keep the kids entertained. 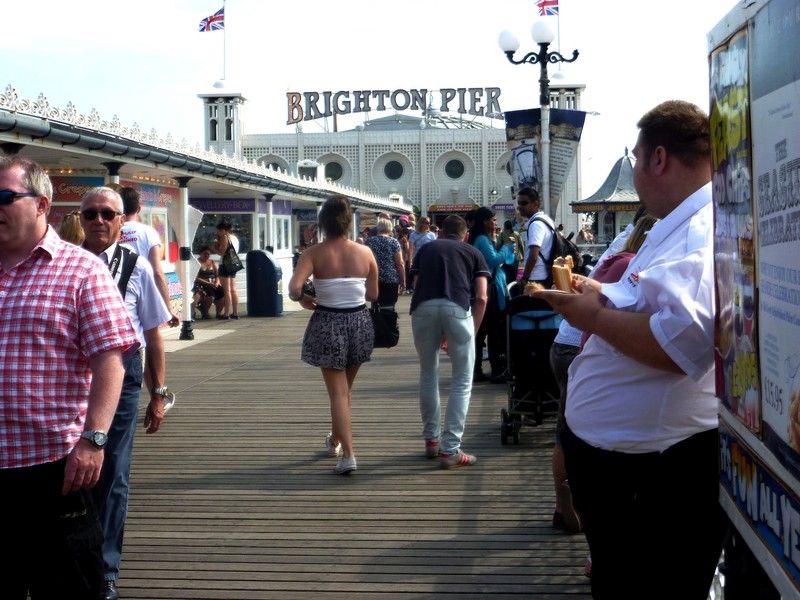 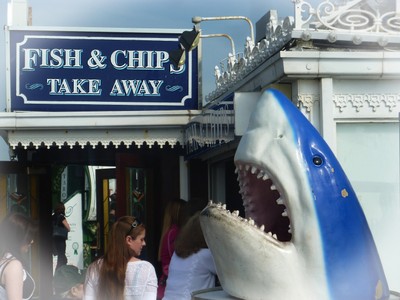 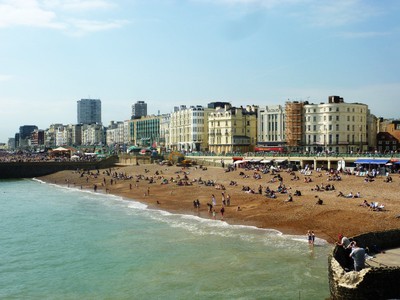 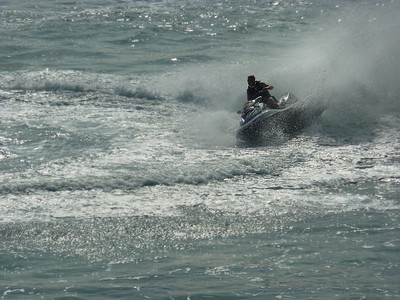 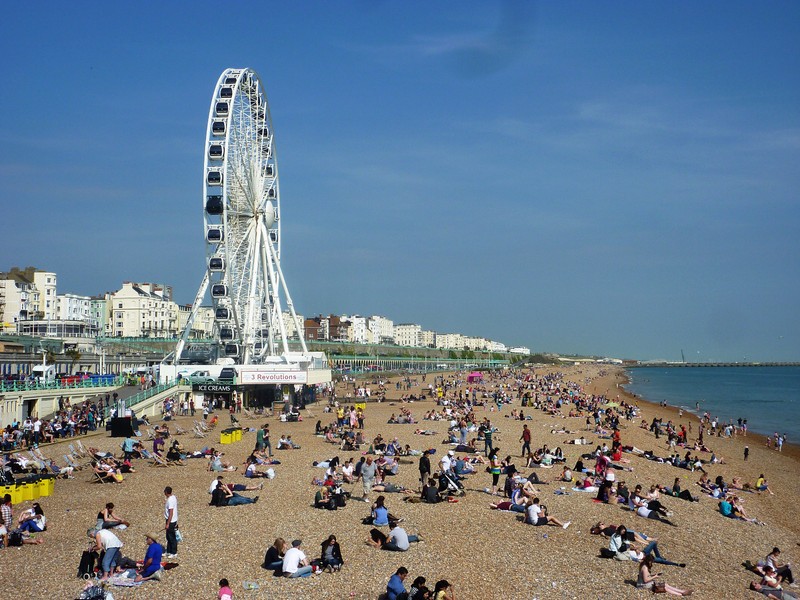 For an interesting lazy walk and window-shopping, we enjoyed the historic quarter known as The Lanes. Here, in a maze of twisting alleyways, quirky independent shops and boutiques selling jewellery, designer fashion and New Age bits and bobs vied for our attention. There are some pleasant little eateries here too. As well as people (and panda) watching while eating fish and chips at a table outside a little restaurant, we enjoyed tea and cakes at the Angel Food Bakery. Someone was ordering a mountain of its stunning cupcakes for a special 40th birthday party, but we were seduced by giant slices of their amazing chocolate cake and Victoria sponge. 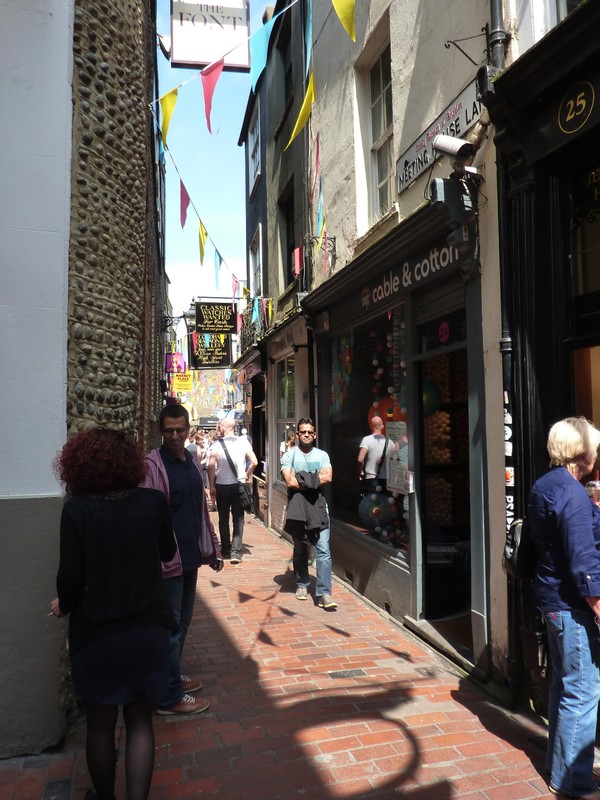 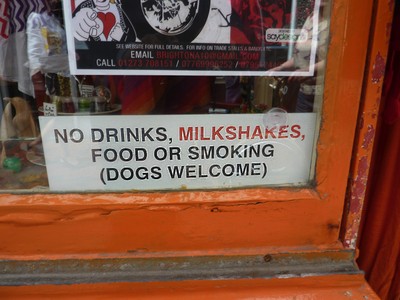 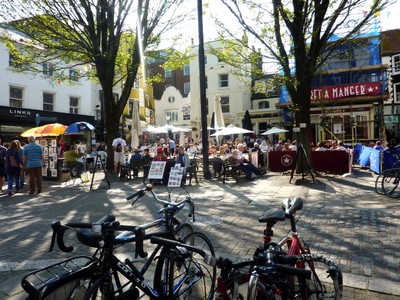 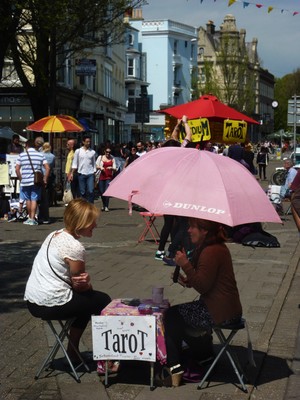 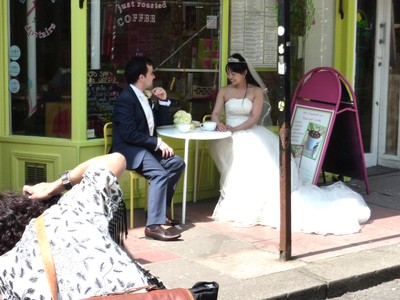 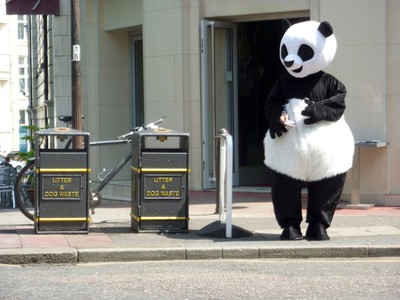 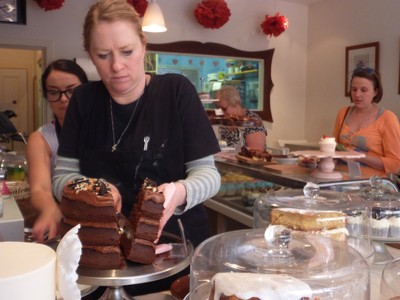 Nearby, in one of the little squares, costumed Morris Dancing sides, one from as far away as Guernsey in the Channel Islands, were taking turns to perform traditional folk dances. To the accompaniment of didly-di-doh music played on the melodeon and the occasional fiddle, lute or tuba, groups of men and women stepped rhythmically up and down amid much jangling of bells, clacking of sticks and waving of white handkerchiefs. Elsewhere, buskers, human 'statues' and comediennes attracted visitors - all part of the Brighton Fringe Festival. 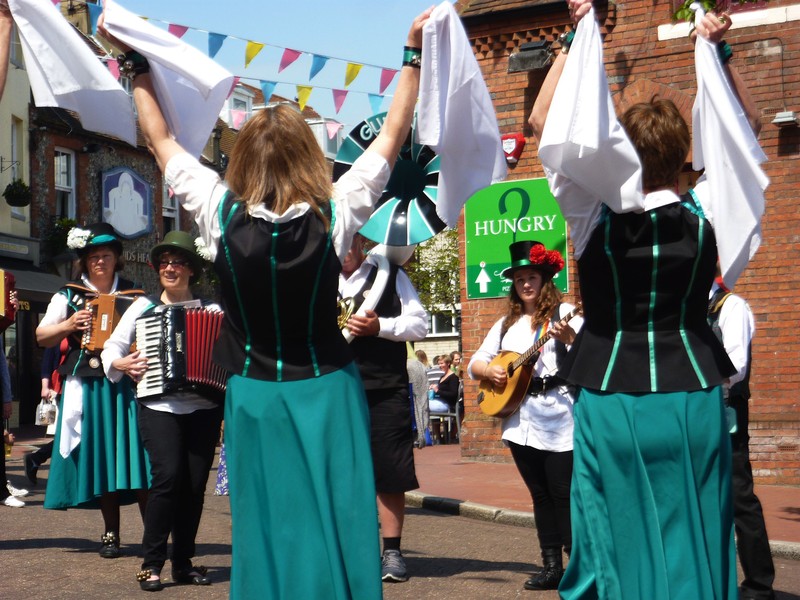 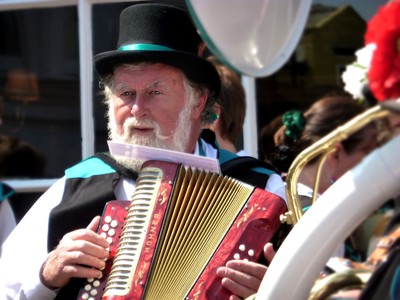 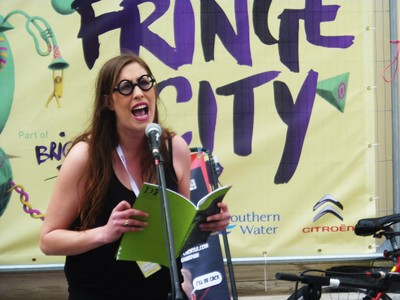 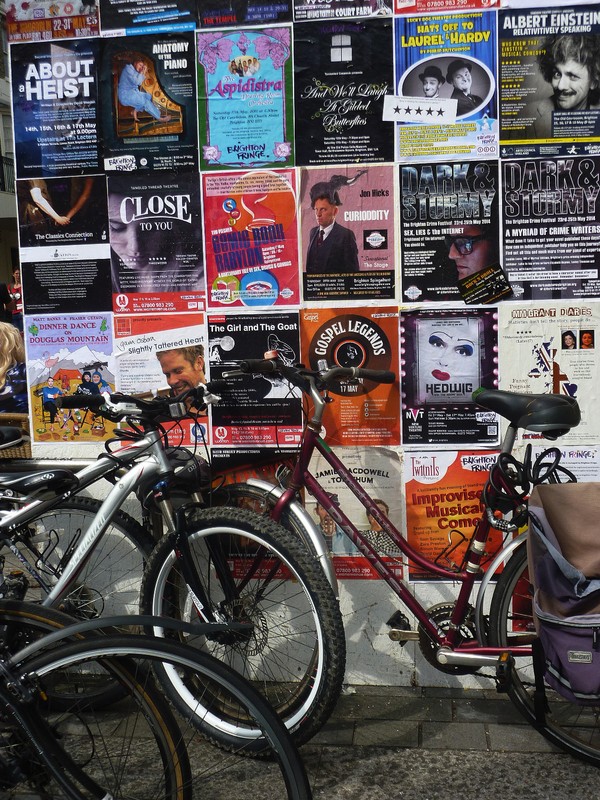 The town was once particularly popular with royalty. The Prince Regent (later King George VI) had a Royal Pavilion built here in the late-18th/early-19th century. It's still here, a well-preserved and imposing building, but it's a bit bizarre to have something with such an exotic oriental appearance in a British seaside town. 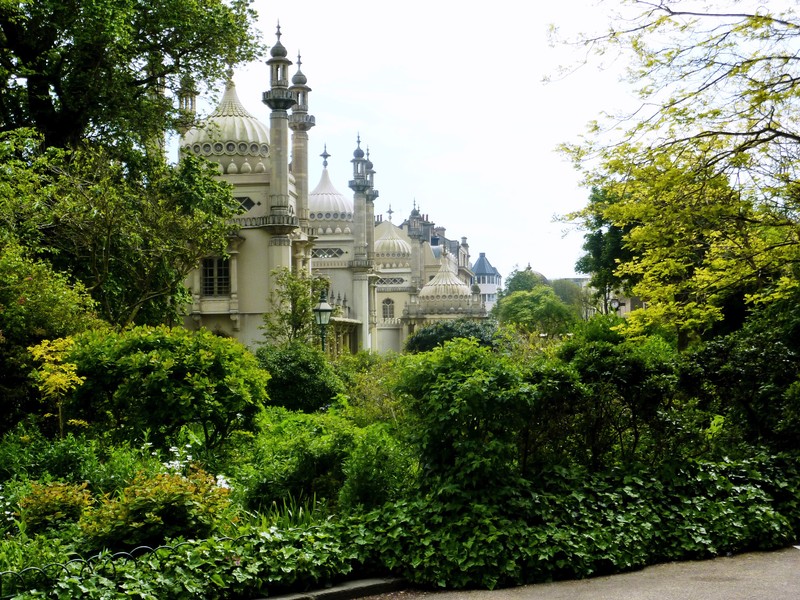 We ran out of time today, so didn't go into the Royal Pavilion to see the stately bedrooms, the ornate banqueting room and the great kitchen, but surely they're somewhat out-of-place in this present-day family resort? We'll have to take a peek next time we come to Brighton - for a next time there will surely be, whatever the weather!